Yesterday was my final day on a project encompassing a series of creative sessions and workshops that came to mean a lot more to me than a job and I am going to miss very much.  How I was even able to get this job came as a result of a sequence of events that began with me simply being vocal and putting myself out there, but that is a subject for an entirely different blog post.

I first became acquainted with Mitcham Library last September as a facilitator for the Young People’s Laureate for London Tour, which was a wow moment to say the least, as I stepped into a library atmosphere I had never seen before.  Faced with a group of young people that were unlike any I had ever worked with, I knew that I had to take a particular approach to engage them and get at least some activities done in a workshop.  Fortunately, the approach I took led to me working with a group of young people that were very engaged, despite the number being small – this had to be the case though if we were going to get work done.

I thoroughly enjoyed working with them from the get-go and was given a quick reminder to not judge a book by its cover – these individuals will never be what you expect.  When I was given the opportunity to return to Mitcham Library as part of the tour, I jumped at the chance, as I wanted to follow through on the work I’d started.  I never imagined that I would be offered a long-term job opportunity at the library, but that’s what happened and I am so glad it did.

Not only was I going to get paid for doing what I loved – getting creative and working with young people – but I was going to have the chance to get to know these particular young people more and hopefully have some sort of positive impact in their lives.  I was ready and willing, although I knew it would not be the easiest of tasks and it ended up being one of the most unpredictable projects I have ever worked on.

It's moments like this when I love the work I do @rODIUMrECORDS pic.twitter.com/6W3a4YrLdf

I have loved it though, more than I can describe, and I was really sad when it came to an end yesterday.  I have genuinely looked forward to going into work every single week, and I missed being there the weeks that I was away – I’m really going to miss going there now that it’s over.  I love these young people, who have had a bigger impact on my life then I think they realise.  They have made me a better person and challenged my mindset even further, while helping me to find an affection for teenagers that replaced the disdain I had from them.

Week on week, I was cracked up with laughter and involved in some seriously interesting conversations.  I was blown away by their intelligence and impressed by the potential seen in most of them, which I hope they are able to tap into.  Slowly, I began to see barriers breaking down and trust being built, which I wish we could build on further, as six months wasn’t enough time to fully engage this group – they only got used to us more recently.

I adore my Mitcham Library Crew – the name affectionately given to the participants of the music workshop – and I was beyond proud of their growth over time, especially those who were brave enough to take to the stage and perform in Wimbledon Library.  They quickly became some of my favourite people, particularly my partner in crime, Conrad.  Everyone had a special part to play, including one girl who never got involved with the any of the music related activities, but would regularly come to simply support her friend – it would not have been the same without her.

And then there was drama, that varied to big groups playing games, to drama activities with four individuals, to in-depth chats with just one young person.  You never knew what you were going to get, but my drama partner, Rachael, and I enjoyed it all the same.  Some of the best conversations were had in those sessions and that is when I was able to develop a deeper understanding with a truly special young man who is going to do great things some day.

Being around all of the library staff was great too, engaging in conversations with them while having their support and expertise.  They were all lovely and greatly encouraging, but I have to give a special mention to the lovely Caprice, who would always chat to me and Rachael as we waited for Drama to begin, and also the wonderful Kurtis for a number of reasons.  Special mention to Sarah and Priyanka too.

Hopefully I’ll be able to do some work in Mitcham Library again, but for now I’ll just have to do with making visits to see the group of people I have come to care about so much.  With determination, learning and support, these young people are going to go on to do great things and make me proud.  I will never forget them.

So proud of these young people, especially my girl Eileen singing the lead, she's come so far. Work like this cannot stop in #Mitcham, it is so needed pic.twitter.com/916XaouqlM

As you may know, I’m passionate about young people and young people being the change they want to see in the world.  In fact, I want young people to use their voices, particularly through writing, to make themselves heard and start making those changes.

What you may not know, is that I recently made a short film with a charity called Fixers, which uses media to help young people ‘fix’ something in their community.  We thought that spoken word would be a powerful tool, so I wrote a spoken word piece (with a couple of lines added by my girl Britney), which became the script for the film.  This was actually the first time I wrote a spoken word piece, but as you know, I’m now all about writing poetry.

The film was shot in my beloved hometown of Croydon and I had some great young people reading the script — four of them just happened to be my friends and family (shout out to the beautiful Jemel, Rhianna, Nahed and Naomi).

When I eventually saw the film, I was so happy that I cried and I couldn’t wait to show it to everyone.  I had a launch for the film last Monday and it went live on YouTube the same day, giving everybody the opportunity to watch it.

But of course, I wanted to write a little something and share it with all of you, the community of bloggers who I love so much.  So below is the film and I hope you like it.  This is ‘What Would You Say?’

Yesterday I came back home after spending twelve great days in Bosnia, which proved to be a great trip for a number of reasons.

I always saw the opportunity to go to Bosnia as a blessing, particularly because I want to work with young people and this was a trip that involved working with young people.  It also centred around culture and social change, which is what I’m all about.

However, this was a trip that came at an ideal time, as it forced me to come out of my comfort zone and gain confidence when interacting with others, which is exactly what I need right now as I continue to set up my youth platform.  I also gained various skills that will help me in my future endeavours.

My time in Bosnia has also provided me with a lot of writing material, at a time when I was slightly struggling with writing ideas, particularly for this blog.

The greatest thing about this trip though was meeting so many beautiful people, who I know that I’m going to maintain friendships with and will definitely bring something new to my life.  They made me feel comfortable in a short space of time and I was able to connect with so many of them, which doesn’t happen very often for me

Again, God’s got my back and I’m so glad that he enabled me to travel to Bosnia at the most ideal time.  I look forward to telling you more about it. 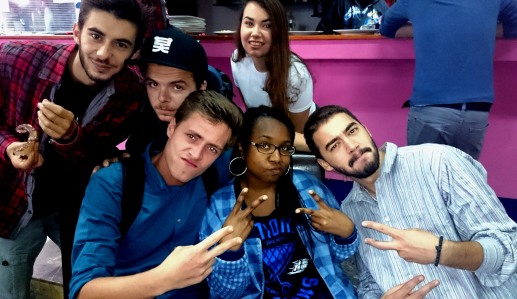