After writing about a duo and groups of individuals, this is the first of my series that will be written about a single person.  It had to be done, as this person is part of my YP Insight family, she joined the TCFT community after participating in TCFT Croydon 2018, and most of all, she has become one of my good friends.  It’s weird, I feel like I’ve known her for years when we only met in June, but I guess it’s because we stay in such regular contact.

We didn’t speak much when she came to Poetic Insight for the first time – I was doing my host thing.  Our friendship really started when she joined me on one of my walks home from Croydon in the summer.  I appreciated the company and enjoyed some quality, humorous conversation, making a change to the solitary walks to music I’d usually take.

Although it was only one walk, the quality conversations have continued over catch ups or at events.  We also have numerous cyber interactions, talking on various subjects from poetry to work to boys.  And a lot of the stories she tells me are hilarious – you wouldn’t believe this girl’s life sometimes.

I feel blessed to have someone like Mhairi in my life, not only because she shares my love of poetry and we can go to poetry events together, but because she gets the work I do – she’s my kindred spirit in a lot of ways.  She not only has a love for YP Insight, but she contributes and supports in any way she can.  She’s an ideal TCFT participant, who threw herself into the process.  In fact, Mhairi throws herself into anything she does – I know she will always be willing to support and get involved when she can.  I admire that.

What I think I most admire about Mhairi though, is her ability to strike up a conversation and keep it going with anyone.  It’s brilliant – I sometimes say, ‘I wish I was more Mhairi,’ because of it.  Meeting people like Mhairi makes the work I do even richer, and also a whole lot easier.  Having friends like her – loyal, supportive, caring, funny – makes life a lot brighter.

Thank you Mhairi for being such a big part of my 2018, and I hope that will continue for years and years to come.  We need to get a picture together as well, because I don’t know how that hasn’t happened this year.  Love you girl.

My family means the world to me, so losing any one of them is one of the hardest things in the world to deal with, especially when the loss is completely unexpected.  After losing my grandad back in March, I never imagined that I’d have to say a final goodbye to another one of my family members this year, but just under three months later, that is what happened.

Yesterday, I was shocked to the core to the learn of the death of my Aunty Joce.  With my grandad, I at least had some time to prepare for his death after witnessing his battle with illness, but with my aunty it came out of the blue.  I keep on replaying the moment I was told that she died over and over again, because it doesn’t seem real to me.  It’s like we’re all in a bad dream and I just want us to wake up out of it.  Now, all we have is memories.

Some of my most treasured memories with my Aunty Joce are from my childhood.  I loved going round to her maisonette nearby and sleeping over.  I remember sitting down to watch TV with her or reading Cinderella on her sofa.  I also liked when she would do my hair, as it would always look really pretty and extremely neat.  I’ll never forget the time she plaited my hair when my mum was a way, and then put the plaits into two bunches with my favourite hairbands.

My aunty later moved further away, so I saw her less than before, which made every event spent with her a priceless experience.  You could always count on her being the funny one – I know that family gatherings will be missing a lot of laughs without her.  Her quick wit and dry comments never failed to make me laugh, and watching her interact with my grandma was a hilarious source of entertainment.

I also enjoyed going to my aunty’s house, because she was so hospitable.  She always did what she could to ensure you were comfortable, whether that was through giving you a blanket or a pair of slippers.  If my Aunty Joce knew you were coming, she made sure there was food prepared and you would not be disappointed, because she was a real good cook – I used to love her delicious macaroni pie.  I’ll always remember her offering me and my sister a hot drink when we were at her house one evening and saying that we should have a decaf cappuccino she bought at the pound shop, because she thought that they were “very nice”, and you know what, she was right.

Of course, you can’t be hospitable without being caring, which my Aunty Joce was.  When she heard about my grandad, she ensured that she messaged me to show her support.  And when my dad broke his foot, she took the greatest care of him, which I will forever be grateful for.

My aunty also had a real sense of style.  It was great to see the different hats she wore and the different handbags she carried to match her outfits, but more than anything, it was about her reading glasses.  I recall being at my Aunty Joce’s house one day and her showing me and my sister the collection of reading glasses that she had.  When I commented that she had so many, she told me that it was so they could go with different outfits.  Green, purple, black – the glasses came in numerous colours, usually with diamantes on the sides or along the rim.  There was also this very compact pair, which I was amused and a little confused by, but she simply said that they were good for carrying in a small handbag.

My aunty was a gem who will be greatly missed, but she will always be in my heart and I am grateful for all of the memories I have.  I love you always and forever, Aunty Joce, and I hope to see you on that great day when Jesus comes again.  May you rest in peace.

As I reflect on 2015, one of the things that keeps coming to mind are the people.  If you know me, you know that I love people (most of the time) and that the people in my life play a major part.  They are the ones who support me, make me laugh and help to create lasting memories, so I thought I’d shine a light on some of those beautiful people.

I love my family so much, in spite of their imperfections.  My Uncle Keith and Aunty Cynthia made me feel completely at home when I stayed with them in Huntsville, and I loved having the opportunity to get to know my cousin Kaleem better.

Of course, there’s someone in my family who is a stand out time after time.  My sister, Rhianna, was a star again this year and despite some bumps in the road, we’ve come through 2015 tighter than ever.  She’s been my main supporter in all I do, provided a ton of jokes and supported me through my madness — I genuinely don’t know where I would be without her.  I’m also prouder of my sister than I’ve ever been, as I’ve watched her display great strength, start a degree and finally get the job she deserves. 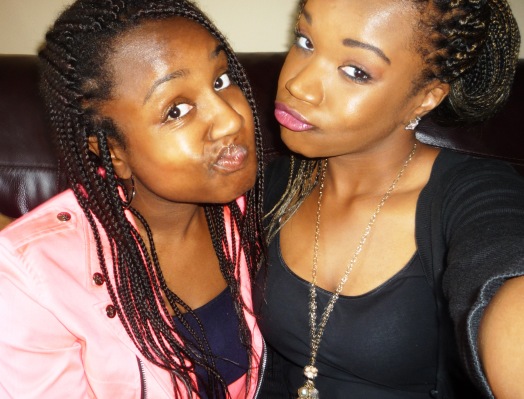 I also have to mention my adopted brother, Jemel.  Now my parents didn’t actually adopt him, but I’ve adopted him as my brother.  The support Jemel’s shown me this year has been amazing and touched me more than I think he’s realised.  I was incredibly thankful to him for taking part in my short film and watching him want to do well for me provided me with so much joy, as well as laughter.

Then there are my crazy, dysfunctional, beautiful, church family, who never fail to play a big part in my life. I’ve enjoyed conversations with my girl Sh’kira, who I’m always excited to see and is always interested in what’s going on in my life.  I’ve laughed with my darling Elliott, who came out with some classically weird lines this year which had me dying of laughter.  But most of all, it meant a lot to see the love and support shown by my church family on my 23rd birthday.

I’ve been fortunate enough to stay friends with a number of girls from school and sixth form, who continue to show me love and support year after year — I was overcome with emotion when Ope unexpectedly gave me flowers and a card at my launch.  However, I’ve got to shout out one of my special Textiles girls, Nahed, who’s been there for me big time in 2015.  She was in my short film and came out to the launch, just like Jemel, but she’s done so much more than that.  She’s constantly checked up on me, shown huge amounts of love, and we’ve been able to connect on similar situations that have been affecting us.  Anyone would be lucky to have a friend like Ned.

I’ve also made a whole load of new friends this year, mainly because of my travels to Bosnia and the USA.  In the USA, I met some lovely people, like Matthew, Glen, Kojo and Khyle, but most of all, I had the privilege of meeting Britney, one of the nicest people you will ever come across. Britney’s got a skill for writing and she’s a spoken word ninja — I was lucky enough to see her perform at Oakwood and she gave some of her wonderful words to my own spoken word script.  And just like most of my friends, Britney is funny; just last week she brought me a lot of cheer with the best Christmas message ever.

Then in Bosnia I met an abundance of beautiful people — Lidija, Lara, Katarina, Nina, Marko, Biljana, Sandra, Ellie, Amy, Izzy, Jessie, Rory, Ljubiša, Nemanja, Tina, Alex, Mikica, Nevena. My house sister Naomi, who was also in my short film, and the hilarious Julia, who was kind enough to come and support me at my launch.  The list is endless and there are so many others I would love to name, but I wanna spend a little time on my friend Filip.

Filip is a beautiful being, full of kindness, caring and sincerity.  He’s intelligent, serious and wise beyond his years, but fun, entertaining and witty.  He’s a writer, like me, and a musical romantic who shares my love of Florence + the Machine. I feel blessed to have found a friend in Filip, who’s bought me plenty of laughter and put many smiles on my face in a short space of time. 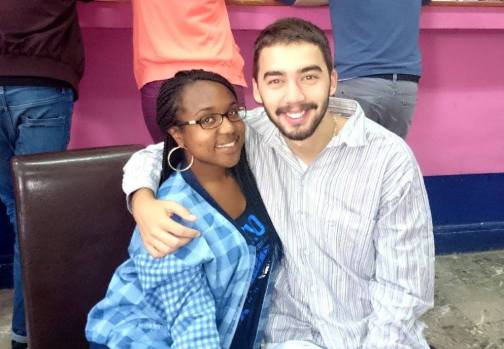 There are so many other beautiful individuals who have been big a part of my life in 2015, including my talent coach Teresa, my best friend Mells, my girl Jhanielle, the lovely Aisha, my hilarious grandparents and of course, my own parents.  I’m so thankful for the people in people in my life, and looking back, I can see how blessed I am.  I’m looking forward to developing these relationships and meeting more beautiful people in 2016.